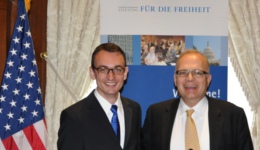 Until recently, a great majority of scholars worldwide assumed that the increasing economic and scientific progress would lead to the secularization of societies globally. Nearly every scholar expected that economy, science and state would be more and more separated and independent from religion; and that this would lead to the privatization of religion, its removal from the public sphere and in the most extreme vision, the disappearance of religion as we know it.[1]

In the past, the decline of religion in society was not only assumed, but consciously accelerated by state actions. Revolutionary France in the 1790ies made one of the first of these attempts. The French Republic confiscated church property, dissolved many ecclesiastic orders and congregations, removed iconography from places of worship, destroyed crosses and bells, introduced a non-Christian Cult of Reason and killed reluctant clergy. Antireligious regimes attempted the same in the Mexican Cristero War, the Spanish Civil War, the Chinese Cultural Revolution and during the Soviet rule in the Eastern bloc.

Nevertheless, religion nowadays is more vital than ever before in many parts of the world. Neither scientific, economic or social progress[2] nor oppression has led to the vanishing of religion on a global scale. Vehemently, religion is making a comeback to the political map.

The theory of secularization, understood as the disappearance of religion in a comprehensive way, cannot describe what is going on in the world. But we don’t see a comprehensive comeback of religion either. Religious forces in the world are getting stronger and simultaneously so are the nonreligious ones. More and more people consider themselves atheists, secular humanists or religiously indifferent. Even in the US, the most religiously vital country in the West, fifteen percent of the population are not religious at all. And this fraction of the population continues to grow every year.[3]

„Immigration, much contrary to public opinion, is not the major drive behind religious pluralization.“

Immigration, much contrary to public opinion, is not the major drive behind religious pluralization. It is rather the growing free choice of Western citizens themselves what has led to this social phenomenon.[4] The world more and more is becoming very similar to the American society where the experiment of religious freedom has been tested for a longer time than anywhere else in the world, thus every dominant religion is becoming one possible option among many.[5]

This development in the number and variety of religious options is a huge challenge for every liberal state in the world. However; why might this be the case? After all, one would think liberal regimes are best at dealing with diversity because they acknowledge that each individual citizen decides what is best for him or herself. And so in general, liberal regimes are pretty good in accommodating religious diversity. Nonetheless, I truly believe there is room for improvement and here is why.

„I see two major traditions in which liberals tried to develop neutral approaches towards religious policy.“

The Lockeans assume a consensual understanding in society which can then be applied to religious policy. It rests on the idea that certain beliefs are shared by the whole population.[6] The problem with this approach is that the consensus in society is far too small to base comprehensive state policies on it. Even at the time of John Locke himself, the state could not be based upon the consensus of society as a whole. In order to arrive at a larger set of shared beliefs, Locke included only views shared among Protestants to be true for everyone, thereby excluding minorities. He excluded Catholics because of their assumed loyalty to the pope and Atheists because they lacked the fear of punishment in the afterlife and thus couldn’t be trusted.[7] The influential liberal American philosopher John Rawls developed a similar approach. He, too, grounded state policy on what he called ‘overlapping consensus’. He tried to include every belief system in society, whether religious or secular. He failed because he de facto limited the consensus to arguments that were not taken from religious viewpoints.[8] All approaches in religious policy, which are based upon a broad consensus, fail because the consensus is too small to make it the foundation of state policies that would be neutral.[9]

The second liberal approach follows the tradition of Thomas Hobbes. It does not construct the relationship of state and religion on a consensus in society, but completely set apart from religion in society. The state is not only independent from religion; it is superior to religion.[10] Although Hobbes was not in favor of religious freedom at all[11], many liberals, especially in continental Europe and Latin America, followed this tradition. This kind of religious policy can be found in places where the modern state had to struggle against an alliance of throne and altar.[12] In order to break the actual or assumed superiority of the church, liberals used the state itself as an instrument to fight the church, clerics and religion as such.[13] They fostered the provision of state schools, state welfare, etc. in order to reeducate or at least marginalize the religious population.[14] That’s the reason, why the term ‘Kulturkampf’, cultural struggle, was shaped by a liberal from Germany.[15] The problem with this approach in practice is that it only guarantees freedoms for those who conform to the state’s favored tradition. For all others, whom could even be the majority of society, freedom is strongly limited.[16]

Examples for the Hobbesian approach are France and Turkey, where a lot of people assume a strict separation of state and religion. Nevertheless, the French Republic preserves a tamed version of Roman Catholicism by state funding for private religious schools (mainly Catholic), the maintenance for church buildings and a strict observation of religious minorities. The Turkish Republic doesn’t stop at taming religion; it strives to control Islam. The state educates and pays for every imam and every teacher for religion in schools and bans every form of private religious education.

„There is a third way for how a liberal state can deal with a diverse society.“

The Lockean and the Hobbesian approach fail to develop neutral state policy. But liberalism is not lost. There is a third way for how a liberal state can deal with a diverse society. This way follows the tradition of John Stuart Mill and Isaiah Berlin. Both warned against the monopolization of state policy by one group or another – even if this is considered to be done ‘for the good of all’.[17]

When we are serious that every person is a freely thinking and acting being, the state must not shape humans according to the ideas of others.[21] The state has to respect the free choice of its citizens when it comes to religious matters. It must neither privilege nor proselytize individual religions, religion in general or nonbelief. Open religious policy does not homogenize citizens; instead it fosters the practice of tolerance so that the acceptance of diversity is socialized.[22] This process is not easy for the citizens and it will often be a challenge for any society.[23] Nonetheless, citizens have to learn that there must be a difference between legitimate public indignation and illegitimate interference of the state.[24]

While the state must be impartial in the religious sphere, citizens are free to express their belief or nonbelief in public.[25] Religion is a private matter, but at the same time, citizens have the right to show their faith in public life. Neither the public nor the state are reserved primarily for one group of religious or secular beliefs,[26] however, such public sphere must not be a place of state-imposed harmony. Conflicting views must also be allowed to be expressed in public.[27] Different opinions of religious traditions and nonreligious systems can therefore be articulated peacefully as the public visibility of differences is the only way to learn to deal with them.

The state has to give access to funding for services and initiatives of all groups in society; be they faith-based, secular or indifferent. Any such services, whether organized by the state or groups, are equivalent in what they offer the members of society and therefore equally worthy of funding. Every group has the right to get state funding to provide health care, childcare, care for the elderly, shelter for the homeless and so on according to their belief. Precisely because services of the state cannot be neutral, the state has to make funding available for private initiatives.[29] This, however, does not mean that the state gives up its coordinating function. For example, the state sets the amount of funding allotted for certain services. It cannot decide, however, how and by whom services should be provided. To guarantee the freedom of choice for everyone and to avoid monopolies of individual faiths in the provision of certain services, the state has to provide its own services, which should accommodate all traditions and try to be as neutral as possible.

The details of the relationship of state and religion must not be manifested in constitutions, concordats, court decisions and the like. The main principle of openness has to be guaranteed. Yet, the concrete expression of open religious policy can vary from time to time and from place to place. Even within states, religious policy can differ between regions.[30] It is easier to arrive at compromises on a regional or even local level than on the federal level. In such circumstances, there is great danger for conflicts to be fought over in a very anonymous and therefore aggressive and ruthless way. Open religious policy is therefore always a trial-and-error method of opening religious policy for all kinds of religious and secular traditions in society.[31] Conflicts about religious policy will always be present. We can only hope that through the continued handling of conflicts and increased exposure to diversity, we learn to engage in a more civilized way.

I believe we are not seeing the long assumed secularization of all societies. By the same token we are also not seeing a decline of social nonbelief. However, what we are experiencing is an unparalleled degree of a new global religious diversity which represents a challenge for liberal states all over the world because their neutrality is construed in a way that, again, excludes large parts of the population. One way of dealing with this new diversity movement and the failure of the liberal state to be neutral is for the state be to open to all religious and secular traditions. This kind of relationship between state and religion is what I call ‘open religious policy’.

To further summarize, in my opinion ‘open religious policy’ means

–    the state must be unbiased towards religious and secular ideas;

–    citizens have the right to practice their religious and secular ideas in the private as well as public sphere;

–    the state guarantees the rights of its citizens to leave their congregation;

–    religious policy can be legitimately distinct in different times and places.

[3] Barry A. Kosmin, Ariela Keysar, ‚American Nones: The Profile of the No Religion Population‘, 2009.