Start English Publication: Bridging the Gap – An Arab-European Dialogue on the Basics of... 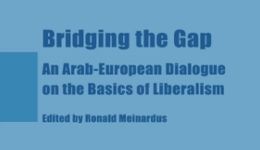 The proceedings of the conference „Bridging the Gap – An Arab-European Dialogue on the Basics of Liberalism“ have been published. The conference was organized by the Friedrich Naumann Foundation for Liberty, the European Liberal Forum and the Forum for Greece from the 16th to the 18th May 2013 in Cairo, Egypt.

The volume presents the speakers‘ contributions from Algeria, Belgium, Egypt, Germany, Greece, Italy, Jordan, Lebanon, Libya, Morocco, the Netherlands, Palestine, Poland, Tunisia and Syria. The volume deals with crucial liberal topics such as the political and economic order and the role of religion in Arab and European societies.

Two articles focus on religion. Their authors are the chairman of the Open Religious Policy Forum Sven Speer and Mohamed Tamaldou, former president of the Arab Alliance for Freedom and Democracy. Speer’s article titles „The role of religion in society and politics in Europe, or: three myths of secularity in Europe“. He disproves the common misconceptions that European societies would be fully secular, European states would separated from religion and that such a separation would be normatively superior. He contrasts these three myths with the foundations of Open Religious Policy.

Tamaldous article deals with „The role of religion in Arab politics and society“. He reflects the history of the relationship of state and religion in the Arab countries and the treatment of religious minorities. Afterwards he describes the relationship of those ideas in Islam which today propose tolerance and those which demand a restrictive policy on religious freedom.

The Changing Role of Religion in Western States and Societies